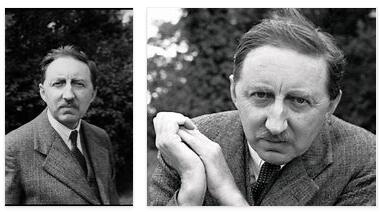 Lewis Carroll (1832-1898)
writer, mathematician, photographer. Lewis Carroll was born in Daresbury in 1832 to a future bishop. He studied in Oxford, among other places. With the work “Alice in Wonderland” from 1865 he wrote the most famous children’s book in the world, which has been made into films several times. Word jokes, satire, and mathematical logic are among the ingredients of the book, which has been just as highly praised by mathematicians. Carroll died in Guildford in 1898.

Roald Dahl (1916-1990)
The novelist and children’s book author Roald Dahl was born in Llandaff in 1916 to Norwegian parents. “The Gremlins” (1943) was his first children’s book and was later successfully made into a film, as was his second children’s book, “Charlie and the Chocolate Factory”. The master of black humor, who was awarded the Edgar Allan Poe Award and others, died in Great Missenden in 1990. He also left two autobiographies: “Boy – beautiful and terrible things from my childhood” and “On my own. My experiences abroad”.

Daniel Defoe (approx. 1660-1731)
The novelist was born in London as the son of a craftsman who traded in candles. He first established himself as a businessman and traveled around the world. At first he wrote ironic pamphlets, but then published his own magazine and, since 1719, wrote on “Robinson Crusoe”, the work that is now considered to be the origin of English novel art. Defoe, who campaigned for freedom in his country throughout his life, died in London in 1731.

Charles Dickens (1812-1870)
Charles John Huffam Dickens, the famous writer, worked as a paralegal in London at the age of 14 and spent all his free time in the library of the British Museum. From 1932 he was a reporter for the “Morning Chronicle” and soon began to publish magazines and literature. He is one of the great English storytellers and also distinguished himself through social engagement. His works (including “Oliver Twist”, “Great Expectations”) provide deep insights into the living conditions in Victorian London. Dickens, who also wrote under the stage name Boz, died near Rochester in 1870.

John Donne (1572-1631)
writer and poet. John Donne was born in London in 1572, where he later died in 1631. He grew up in a Catholic family, studied at Hertford College in Oxford and in Cambridge. Donne went down in history as the most important exponent of metaphysical poetry. His poem “The Canonization” from 1896 is most celebrated.

Sir Arthur Conan Doyle (1859-1930)
writer and doctor. Arthur Conan Doyle was born in Edinburgh in 1859, where he later studied medicine. As a ship’s doctor he traveled around the world and wrote literature on the side. Doyle was the inventor of the world-famous fictional detective character Sherlock Holmes, which brought him great fame during his lifetime. Together with Dr. Watson clarifies numerous tricky cases in London to Holmes. The stories were filmed several times. But historical novels and non-fiction books were also part of the Scot’s repertoire. Doyle died of a heart attack in Crowborough in 1930.

Jasper Fforde (born 1961)
author, cameraman. Jasper Fforde was born in London in 1961 and made her debut with the novel “The Jane Eyre Case” (2001). The main character Thursday Next was so well received by the audience that Fforde has since published several follow-up volumes. With comedy, puns and elements of fantasy, he wrote himself in the hearts of readers all over the world. Fforde also bribed as a cameraman for the 007 film “Golden Eye”. We’ll hear a lot more from this artist.

Helen Fielding (born 1958)
writer and journalist. Helen Fielding was born in Morley in 1958 and studied at St. Anne’s College, Oxford. From 1979 she worked for the BBC, later for the “Sunday Times” and other British newspapers. Fielding became internationally known for her columns on “Bridget Jones”, which appeared in 1995 and were later published as a novel and finally made into a film with enormous success.

Henry Fielding (1707-1754)
After studying in London, Henry Fielding initially wrote 25 dramas, but then began writing novels after the novel form had established itself with Daniel Defoe’s “Robinson Crusoe”. Fielding came out with “Tom Jones”. Notorious for his sharp tongue, he defended the government against the Catholics, which is why he became the magistrate of Westminster and Middlesex, and devoted himself to fighting crime until he died in Lisbon in 1754.

Ken Follett (b. 1949)
Follett was born in Cardiff in 1949 to strictly religious parents and began reading at an early age. His best-known work is the history novel “Die Säulen der Erde” from 1990. The play was not only filmed, but also made into a game. The 1978 spy thriller “Die Nadel” made him internationally famous. The bestselling author, once a philosophy student at University College London, initially tried his hand at investigative journalism, but later gave up in order to devote time to his true talent.

EM Forster (1879-1970)
writer. Edward Morgan Forster was born in London in 1879 as the son of an architect. He studied at Cambridge, where he met important authors with whom he belonged to the literary circle of the Bloomsbury Group. His most respected works include “Room with a view” (1908) – German: “Room with a view” (1948) and “Howards End” (1910) – German: “Wiedersehen in Howards End” (1949). Many also know his sentence: “How can I know what I am thinking before I hear what I am saying?” Forster died in Coventry in 1970.